The Indiana Land Cover is a high-resolution (1 meter) data product that provides baseline land cover information for the state of Indiana in multiple formats to support different land management applications. It is derived from color infrared imagery and LIDAR flown between 2011 and 2013 as part of the Indiana Othophotography and LIDAR data acquisition program. For some counties the LIDAR data was acquired between 2007 and 2010. In addition color infrared imagery flown as part of the 2012 National Agriculture Imagery Program (NAIP) was also used to aid the classification process. Over 8 terabytes of LIDAR and aerial imagery were processed for the state through EarthDefine's high performance Geographic Object-Based Image Analysis (GEOBIA) processing platform to create the land cover layer.


What can you do with the Indiana Land Cover data?

EarthDefine used a Geographic Object-Based Image Analysis (GEOBIA) processing workflow to create the Indiana Land Cover dataset. Multiple ancillary datasets including transportation framework vectors, TIGER demographic data, hydrological, cadastral and terrain data were used along with color infrared aerial imagery to develop an object based classification workflow. LIDAR data was used to develop the tree class and derive buildings that were added to the impervious class. NAIP 2012 data was also used in resolving classes created from the primary 2011-13 orthoimagery. Over 839.7 million image-objects were created from over 36,184 square miles of 1 meter resolution source imagery and classified through the GEOBIA platform to create a 5-class classification with an overall accuracy of 93.3%. 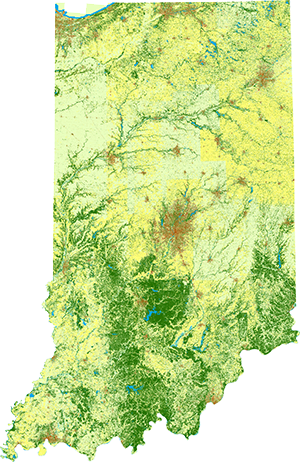